Turning Any Press into Good Press (Part B)

Any Press Can Be Good Press

Later, I would come to the realization that most people don't remember what they read about you, but that they read about you. They're not going to remember that Lawyer John Smith represented that convicted drug dealer and lost the case 3 years ago, they're just going to remember "Lawyer John Smith". Hey - they've got your name and they know you're a lawyer, that's instant lawyer advertising!

Another story I can relate pertains to a friend of mine, Jon, who filed a lawsuit against one of those companies that "loan" you money for outrageous interest rates. His local newspaper ran a small piece about the lawsuit and quoted him - seemingly great press, right?

Unfortunately (at first) they also quoted the former dean of his law school near the end with a statement that made it sound like Jon's case didn't have a chance. Most lawyers would read this article and think that no amount of lawyer advertising could erase this sort of black mark on their reputation. Not Jon. He took this as an opportunity to reinforce in his lawyer advertising that he was the little guy willing to fight for the little guy against the big guys.

Jon didn't let some negative words from a former law school dean get the best of him. He kept on going, even against overwhelming odds. At that point, it didn't matter if he won or lost the case, he already generated enough buzz about his David and Goliath struggle against both the loan company and against the nay-sayers like the dean.

Jon's potential clients and current clients see evidence that he's the everyday lawyer fighting for the everyday client like them. This is just another example of how to generate great lawyer advertising with little to no effort on your part.

At Great Legal Marketing, we focus on saying NO to ineffective traditional lawyer marketing. We seek out new strategies to market to our ideal clients in ways they'll actually respond to. So how do you get started? Get a complimentary report and CD from legal marketing guru, Ben Glass.

Ben Glass will teach you how to: stop marketing like every other lawyer on the block; grow the kind of practice you can be proud of; and still get home in time for dinner. Contact us today - 703-591-9829. 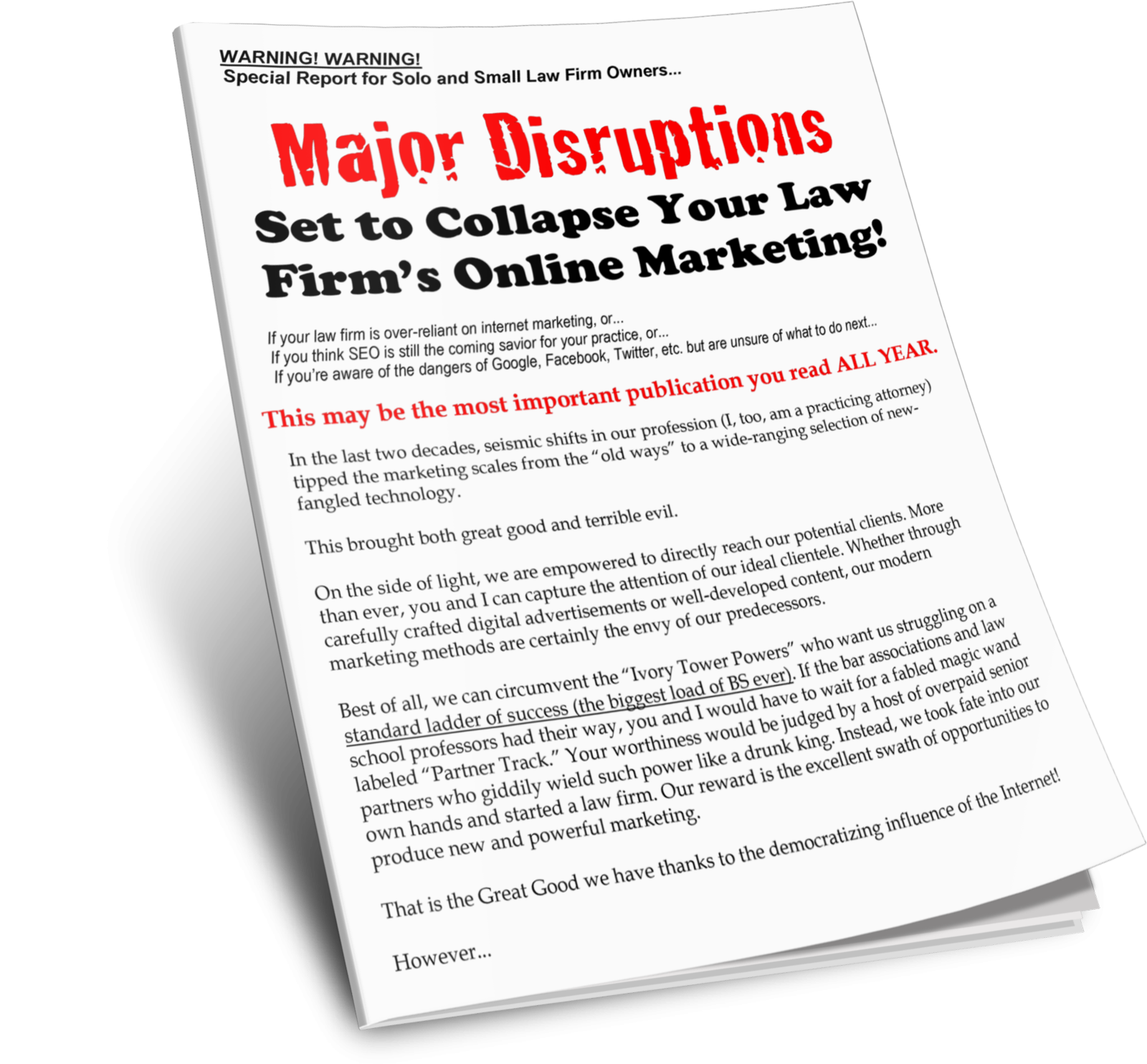 Does it feel like internet marketing has gotten harder in the last year than in the last 5 years combined? It could get much worse very quickly.

More than ever, lawyers can capture the attention of their ideal clientele. Whether through carefully crafted digital advertisements or well-developed content, our modern marketing methods are certainly the envy of our predecessors.

But… For every good idea in online marketing, there are a dozen downright stupid ways to waste your time, energy, and money. More lawyers have wasted more money on bad ideas from snake oil salesmen than at any point in our history.

The unwise spending isn’t the end of the story.

It actually pales in comparison to the greater threat.

The greatest EVIL in our continuing over-reliance on internet marketing is the largest tech companies themselves!