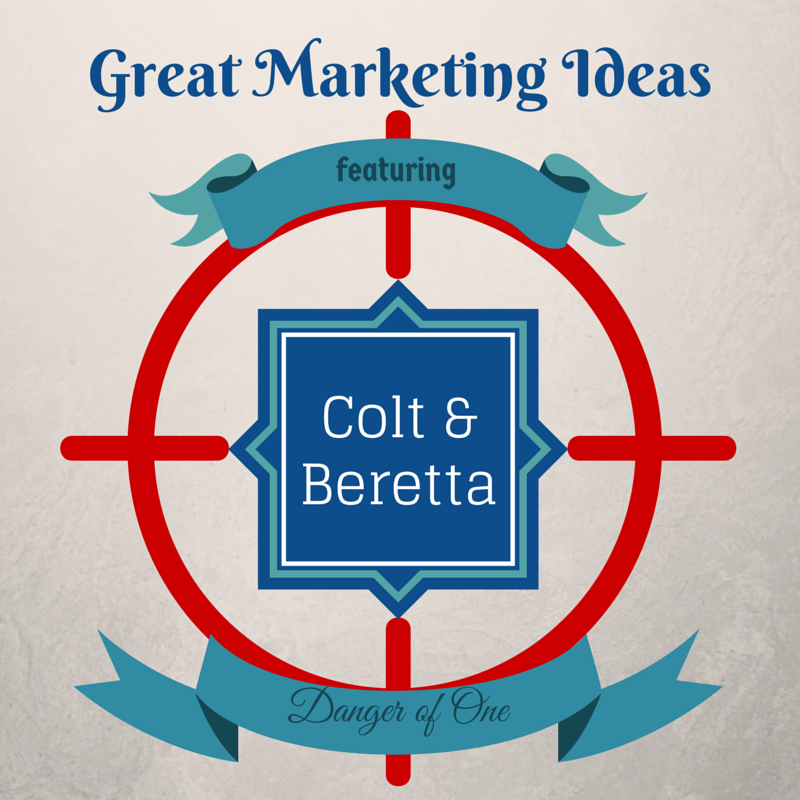 In 1985, Beretta won the contract to manufacture the standard pistol for the US Army. The result was the M9 pistol. It was the replacement for Colt's M1911, which had been the standard sidearm for the army for nearly 70 years.

In 2013, Colt lost its contract with the military. This summer (in 2015), Colt filed for bankruptcy.

Beretta is now likely to be usurped by an American gun manufacturer as its M9 is scheduled to be replaced. The financial repercussions will play out over the next few years, but it doesn't look good for the brand.

Both of the companies fell victim to having built so much of their business around a large contract that they (mistakenly) thought would be there for longer than it was - being the obselete option for the military ultimately did them in.

What does this have to do with your law firm?

Never Be the Victim of "One" with Your Marketing

One is a dangerous number in marketing. You never want to just have one stream of leads, one way to get new clients, one pipeline bringing you all of your revenue.

It doesn't matter what it may be, you can't safely build a practice on just "one" of anything when it comes to marketing. If you rely too heavily on Google for new leads, your entire practice is subject to Google algorithm updates - that's shaky ground to build your house on at best.

What about if you're getting a ton of referrals from a couple of attorneys in your area? You are subject to someone changing their minds about who they refer those cases to after they build a relationship with someone else. This does happen, and it does hamstring law practices.

Getting clients almost exclusively through a print, radio, or television ad? What happens when the return on your investment drops too low to make it worthwhile to run the ad?

The only way to prevent yourself from being struck down by the "danger of one" is to cultivate many sources of leads. Build many referral relationships rather than just one or two big ones. Work on your search engine optimization while also making connections with local business owners who could be sources of cases. Create a print ad while you work on Facebook ads as well.

You want to ensure that people can find you many ways, online and offline. There simply isn't a workaround for this problem. It doesn't matter how great your current excellent source of leads may be right now. You won't find any guarantees on the future - and it's arrogant to believe that you and your lead source will somehow be the exception to this rule.

Beretta and Colt have learned the hard way that you can't build a business around a source of revenue that is non-guaranteed, even if federal contracts feel that way at times. Their valuations were built around steady income from the US Army, and that value goes away as soon as the Army decides to move on. It doesn't have to be obsolescence that sinks you like it did for the gunmakers. You downfall could just be thanks to Google changing the rules or a print ad no longer pulling the numbers it once did for you.

Never let your practice's fate be under the control of anyone or anything else. Build multiple pipelines to your practice so that if one gets turned off, it won't affect you as much. You'll be able to bounce back faster and more efficiently if you are just able to spend time increasing the volume from the other pipelines as needed. This means that you should also actively work on building new pipelines today, even if you have multiple ones already working for you. If you need an extra bit of motivation, put an "Under Construction" sign up in your office as a reminder!

by Charley Mann [email protected]
Connect with me
Charley is the Chief Marketing Officer at Great Legal Marketing and believes in results, Results, RESULTS!